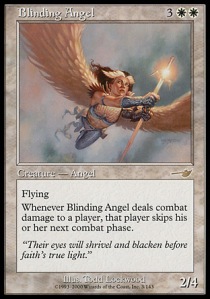 The first card in this list gave me the biggest headache. I guess I’m not much of a white mage, at least not in the creature department. I chose Blinding Angel because it was one of those cards I ripped out of a booster pack and put in my deck in awe. Recently I traded for a playset. Guess I should build something with Blinding Angel in honor of the awesomeness of yore. I love cards that some decks are just cold to.

One of those cards you basically cram into any deck that contains white. At least that’s what I do. it’s a delicious budget card and a catch-all solution to the things your opponent can throw at you. Not a very romantic card, but I love it nonetheless for it’s versatility. Sometimes, that’s all you need. 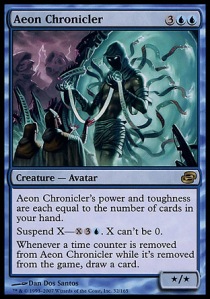 Yeah, I like drawing cards. That’s just who I am. I could easily place Teferi or Mulldrifter here, but my love affair with Chronicler is the deepest. It didn’t hurt that Aeon Chronicler made some cameo appearances in one of the greatest decks of all time, namely Dralnu du Louvre. Which leads us to… 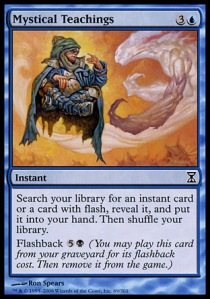 … Mystical Teachings. Probably a much-heard answer to this question, but whatever. It’s the subtle centerpiece of my Faerie Peasant list. Somehow my Peasant lists feel much more competitive than my regular casual decks. I don’t know how that works. Maybe you can tell me when I write about the deck.

One of my returning deckbuilding motives is ‘take this awesome Legend and do cool stuff’. The first of the Grandeur-cycle was Linessa in a pretty dull deck. Korlash, however, made its way into my resurging Mono Black Control deck and became the premier killer creature. He holds the fort, filters lands from my deck (long live Volrath’s Stronghold!) and attacks if he has to.

I wasn’t active during Necro Summer, or however it’s called. That’s why to me, Arena is the king of black carddraw and the cornerstone of my MBC-deck. It does so much at a neglegible cost when the Arena is fueling ginormous Consume Spirits.

Another toughie, since red is to me more of a supporting color than a base one. I have no decks with Flametongue Kavu in it at the moment, but I reckon if one day Mono Red Control will become reality, FTK will be at the basis of it. 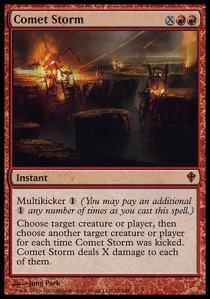 It surprised me Comet Storm didn’t get more tournament play than it did. Sure, it’s a lot of mana, but can’t ramp decks easily facilitate that? Or is it that there are better things to do with lots of mana? Regardless, I recently made a fun-to-play-with Grixis deck based on X-spells, Rosheen Meanderer and Thousand-Year Elixir. This deck rekindled my evergrowing love for Aeon Chronicler as well, and it ignited my affection for this little XRR-gem.

This is no surprise now is it? As I blue player, I love blue cards that aren’t actually blue. Tusker is much more than that. In the early game he is like an instant-speed lovechild of Cultivate and Divination, late game he is just a fatty. Combining all that in one card is a recipe for success. 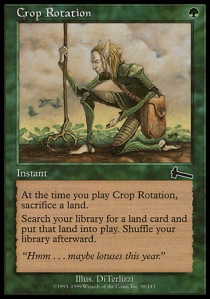 The first time I played with Crop Rotation it was as a one-of in my Academy-deck. Too bad I traded that foil away, because now it is the centerpiece of my Eldrazi Peasant deck. I use it to fetch up Cloudposts and Glimmerposts (see below). Combined with Reap and Sow, copies of Crop Rotation could become superfluous. Not if you include a small toolbox with Sejiri Steppe, Soaring Seacliff and Bojuka Bog to gain little edges, especially during combat. 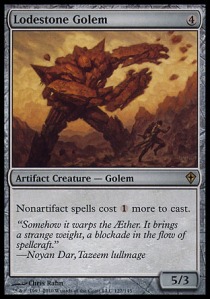 Another recent card. It’s a bit of a griefer card, but not blatantly so. A simple Lightning Bolt will take care of him; kind of a plus in casual-land, where friends are more important than winning. The funniest memory of him I have is when I played against a friend who was contemplating mulliganing, clearly land-light. Then I played a turn three Golem off of Etherium Sculptor, followed by another one turn four. Sometimes evil takes control over me.

When Champions came out, Top was all the buzz in our group. Even at € 2, which was quite expensive for an uncommon. How little did we know. Regardless, I started hoarding them because so many of my decks needed them. Even now it is so often on the shortlist for a new deck, and sometimes I go out of my way not to play Top for once. It’s just that good.

Yes, Finkel. Not his nearly identical counterpart from the very same set. I play 3 or 4 of him in the deck described below and I love it. When in need, he blocks; when you need cards, he attacks for one and draws you one. It’s all so simple; none of this discarding, exiling your graveyard, FoF for +6/+6… Just the best Ophidian of all time.

When writing this I forgot Mishra. Which is a shame, because he was one of the many legends that prompted me to build a deck around when his set released. Back then the deck was pretty slow and at the verge of dying. That is until Esperzoa (more specifically Shards of Alara-block) came along and gave the deck many new goodies to play with. The deck even got a semi-comboish finish with Etherium Sculptor and Sensei’s Divining Top drawing your deck, then using Elsewhere Flask for red and burning them out with Shrapnel Blast.

My love for cards like this is probably why I’m not cut out for tournaments. This cards combines two of my weaknesses: five-color and card advantage. The deck I built with this still exists and I’m gonna write about it someday. It’s not very groundbreaking, but I did build the deck so that every CMC>=3-spell hits a removal spell.

I love Cloudpost. It is the card I turned to when I wanted to build a Peasant deck centered around the Eldrazi-creatures. Of course I turned to green favorite Crop Rotation (and Reap and Sow, and Gift of the Gargantuan) to dig up the lands. With the release of Glimmerpost, the deck has only gotten better. Stay tuned for the decklist.