In my last post, I wrote about a new mono white Commander Lite deck I’d built with Elesh Norn at the rear. Alas, that ship has sailed (as have the puns – although probably not). It’s time to unveil my new Commander and set sail towards the future. And puns.

For those of you unable to decipher my naval metaphors (and steer clear of the puns), yes, Elesh Norn is out. Maybe the above image might’ve given that away, too.

Thinking back, it’s funny how I first thought Elesh Norn would be too weak. She was just a creature, a seven mana-one even, with no protection. She just kills all x/2’s and just buffs your dudes with a double Glorious Anthem. Just. Yeah, right.

The first games I played with the deck went surprisingly well, just like the first games with Riku. I started the deck in the same way: instead of cutting cards from all options, I’d just start from scratch and go on until I had 99 cards to accompany Elesh Norn. ‘Well, this deck looks nice!’ I thought. And it was. I kept playing and kept winning. In the first ten-or-so games, I lost once, to the inevitability of Karador (which, even with added graveyard hate, is still a tough nut to crack).

Already, my friends started grumbling about her. While I had fun playing the deck, my friends met a different fate, although one that was the same every game: play guys, then get locked out by Elesh Norn.

(I apologize for this pun, as for all other word-related attempts at humor. It’s that kind of day today, it turns out.) So this week I decided I had to kill Elesh Norn and replace her. But what with? I briefly looked at Yosei (which would fit the controlling way the deck plays) and Avacyn (which would’ve been too similar to Elesh), but I settled on one of the cards from Commander 2014 – Nahiri, the Lithomancer.

It was one of the cards from that set that really stood out to me (as did both Freyalise and Titania). We’ve talked about allowing Planeswalkers as Commanders, but it seems safer to start with the Planeswalkers that actually say you can use them as Commanders first. I’m a lore guy, and finally knowing the name of the legendary Lithomancer who helped Ugin and Sorin imprison the Eldrazi titans scored big flavor points with me. And hey, being able to say your Commander helped subdue the Eldrazi titans, that’s good stuff right?

Let’s break down Nahiri’s card, what I like about it, and how I’m gonna adapt my deck. First, let’s look at Nahiri in all her cardboard glory. 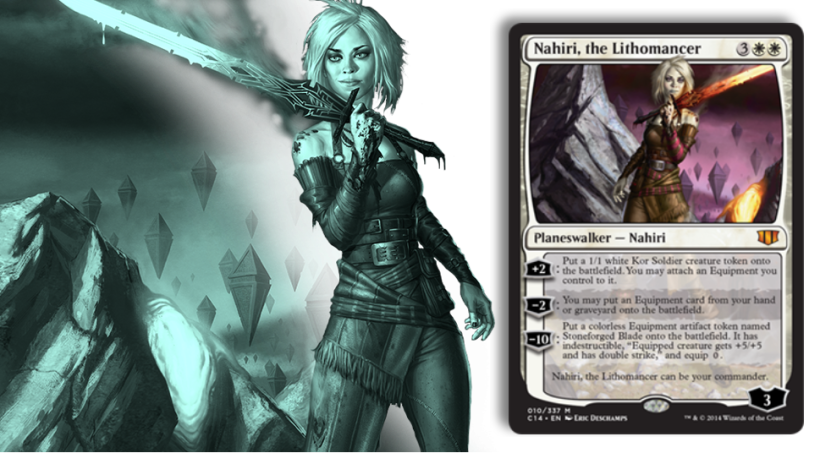 3WW < 5WW. It’s not just a two-mana difference: as you go up the curve, taking another step gets increasingly hard. The step from five to seven is bigger than the step from one to three, for example.

This is the big one. Being a Planeswalker has implications, a lot of which will probably come up during games. Black removal gets worse while red gets better. Will we see more direct damage now? Oblivion Ring-effects get better too. Will proliferate rear its Phyrexian head? Is having a Planeswalker for a Commander enough warrant to include, say, Throne of Geth into your deck? We will have to wait and see.

+2: Put a 1/1 white Kor Soldier creature token onto the battlefield. You may attach an Equipment you control to it.

Cleanup in isle 5 please, because this +2 ability just oozes value. You make a dude that can protect m’lady while generating mana by picking up an equipment. Finding the right set of equipments will not be easy, but it will be fun to look for it. There’s no Batterskull or Swords in Lite. But we do have Skullclamp. Hot diggity.

-2: You may put an Equipment card from your hand or graveyard onto the battlefield.

This ability is not as good as when you get to play with rares, but it is raw card advantage, which is something mono white is not generally known for. I had to go quite deep to find enough card advantage for my deck, to compete with the card advantage-machines my friends play with. I like drawing cards and returning things from my graveyard, so I really like Nahiri in that regard.

-10: Put a colorless Equipment artifact token named Stoneforged Blade onto the battlefield. It has indestructible, “Equipped creature gets +5/+5 and has double strike”, and equip 0.

At first I thought this was just icing on the cake, but the more I think about it, the more I think the one token I ordered may not even be enough some games. I’m curious to see how everything plays out. I can’t wait to get started.

Most of the time, Nahiri starts at 5 loyalty. And with a speed bump for the opponent. I feel like flyers are Nahiri’s public enemy #1, so I’ll be sure to counter that with flyers and creatures with reach. Strandwalker, for example, is an excellent blocker that can be put onto the battlefield with her -2 ability. Elesh Norn will live on in the deck in the form of Living Weapon.

A lady that finally gives the mysterious lithomancer-figure a name and a face. Also, she pulls swords from stone. Let me repeat that: she pulls swords from stones. Yeah. I must say, I also really liked the aesthetics of grand cenobite Elesh Norn. Every color in New Phyrexia had a different visual style. This white look, the cracked porcelain/bone structure, along with the open muscles, really creeps me out. But Nahiri hits a few more notes on my flavor-radar.

Yes, I am very excited to get to work with Nahiri. I think she’s more interactive and way less paralyzing than Elesh Norn, and I think both me and my opponents will breathe a sigh of relief for it.

2 thoughts on “Farewell, my captain”