Watching the Pro Tour each time is kind of a big deal for me. I keep my schedule empty – for example, I once delayed my birthday party by a week. Yes, that big a deal. It’s kinda like with a prerelease, or a draft with my friends, except the Pro Tour is smeared out over three days.

I try to watch as much live coverage as possible. It’s possible I skip the drafts, to watch later when I have a draft of myself with my friends coming up. But most of the time, I watch those live anyway and re-watch some of them later. But as you might assume (and you are correct), watching hour after hour of coverage for three days straight can become tiresome. There are various methods of alleviation.

I don’t know what the English equivalent is, but in Holland we call it ‘vierkante ogen’ (square eyes) when you are glued to a screen all day. Although nowadays ‘rectangular’ would be closer to the truth than ‘square’, the phenomenon is still the same. I like to get some fresh air inbetween rounds, walking the dog or just going outside and snort up some O². Coverage is so stuffed with awesome content these days, it’s hard to skip any of that. I usually skip the videos between rounds and watch the interesting ones later on YouTube.

Anyway, I’ve taken a lot of photos of my activities while watching Pro Tour-coverage. Here’s a collage.

This photograph shows two things, that 1) I’m a multitasker and 2) I like food. You see, watching the Pro Tour is a great activity if you have anything else to do besides it. Eating food (in this case apfelstrudel with ice-cream and whipped cream, cake, and fried eggs) is just one way to spend that time. Not depicted is a bottle of water, of which I try to drink a lot during days. Drink water! It’s good for you! Travis Woo says so.

Other activities displayed above include watching the Olympics (while writing, no less), watching Ajax (my favorite football team – yes, I refuse to call it soccer), playing Duels of the Planeswalkers, or playtesting/goldfishing. More on that later.

Still, I try to keep the focus on the Pro Tour. Each day, coverage starts at 3.00 PM (GMT+1). Which means I’m going to miss the first draft and a bit on Friday, and maybe (though hopefully not) a bit of the Top 8 if games go long – although I don’t think so. On Saturday, I suspect I will miss a bit of the beginning while playing Magic myself, although I’m gonna try and stream during my playtime anyway. What’s better than combining watching Magic with playing Magic? More is better.

Let’s talk about the tournament itself. I don’t know what to expect from draft, since I haven’t really followed Theros-block draft since Born of the Gods. I must say I really like the format itself from my experiences in three prereleases and a couple of Theros drafts. Still, what colors are good and what aren’t is still up for grabs. This weekend will give drafters a good idea of what to expect the coming months. Like I said, I like to watch these drafts again if I have a draft with friends coming up. ChannelFireball’s draft videos (especially LSV’s) will also do.

The constructed portion of this tournament is Block Constructed or, as some call it, the Standard format in a few months. Decks that work well here will be the starting point for Standard once Return to Ravnica and M14 rotate out, and M15 and the first set from the next block become tournament legal. Speaking of which, the name of said block will be made public during the live webcast, presumably on Sunday. I’m also looking forward to that!

Last year, at the RtR-block Pro Tour, we saw that Jace was actually a good card (he’s almost doubled in price since) and that Voice of Resurgence wasn’t too bad either. What will be the hits of this weekend, both the expected and the unexpected ones? Are there any hidden gems that we, the public, haven’t discovered yet? This format is the best for such discoveries. I’m also curious to see how the various devotion decks work (or don’t) without RtR-block key pieces (Boros Reckoner, Nightveil Specter, Frostburn Weird, Cloudfin Raptor, Burning-Tree Emissary, et cetera). Plus, we now have the full pantheon of fifteen Gods. Maybe a new deck will pop up.

Take Pharika, for example. I would love to see her taking the front stage, but I’m afraid she won’t. Still, I’ll take any showing of constellation, whether Pharika is in there or not. Unfortunately, probably being a slower midrangey control deck, that deck is a natural dog to the aggressive decks that are poised to show up due to the lack of a real castable sweeper. Return to Ravnica-block had Divine Verdict, Theros-block has… Extinguish All Hope? Also, aggressive decks now have great early mana with Mana Confluence. I’ll be rooting for the control builds as usual, but the aggro decks will probably be well/over-represented.

Last time I talked about how excited I was for Pharika and constellation. Well, this week I’ll be playtesting and goldfishing my deck while watching the Pro Tour. I’m looking to turn a big pile of cards into a consistent deck of 60. Take a look at my post from last week (and the image below) to get an idea of where I’m going with the deck. 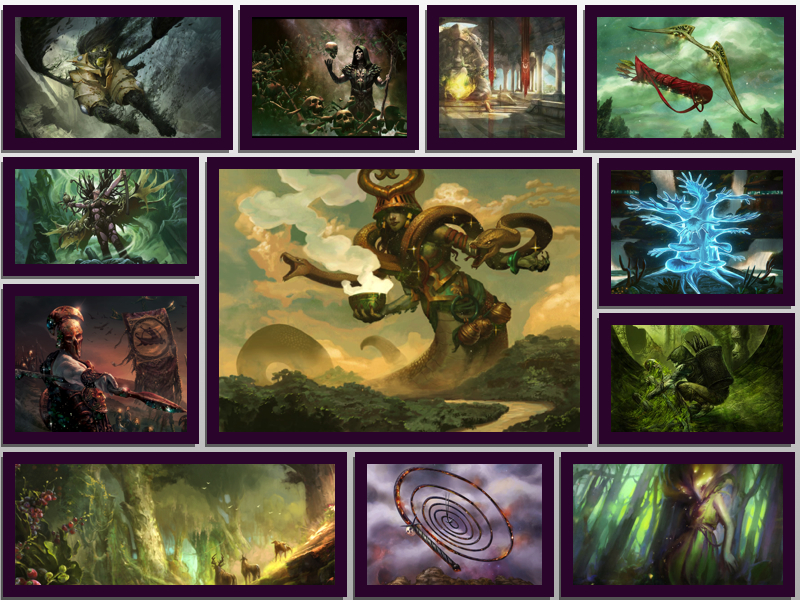 I put Pharika in the center, because that’s where she will be from the get-go. I made a mindmap of the deck using Xmind (check it out – it’s useful and free) of the cards in the deck, made a list in Decked Builder of all the cards I’m considering, and I will sleeve up 60 to start goldfishing with. I do this to get an idea of where the deck is trying to take me, and to really value every single card I thought of. When I have extra space, I add extra copies of centerpieces (like Pharika). And from there, it’s just goldfishing and occasionally laying out all the cards in the deck on the table. I find this a pleasant process, and one ideally suited while watching Magic all weekend long.

That’s all I have for today. Follow me on Twitter this weekend (@stidjen) for thoughts about the format, the players and the webcast. Expect pictures of mostly food, coffee and Magic cards. I can’t wait for it to be Friday! Tournaments are always fun to watch, and WotC has been doing their best to make each Pro Tour better than the one be for. I for one am curious how the King of the Hill-gimmick will be exploited further, as it seems like something that was thought up during the latest Pro Tour, not before.

Anyhow, I’m prepared to be amazed – by WotC, by the players and the decks, and by Pharika.

I’d like to leave you with the collage below, which hints at the next deck I want to build. Can you figure out what’s going on in there? See you next time!

I wrote this while listening to: