Hurray, the Mirrodin Besieged-spoiler is complete already! This is a continuing trend from recent sets, where the spoiler goes up on wednesday instead of the night before the prerelease. Anyhoo, I decided to round up my personal thoughts on the new set with giving the new cards a look. Just the cards that interest me, mind you. Let’s get to it. Oh yeah, you can find my first review here.

I have to say, I didn’t see a lot of cards that really did it for me this time. It felt like as if the big guns got previewed early and there wasn’t a lot of interesting material left. It’s probably my imagination though, as the card I’m going to talk about last is just what the doctor ordered for my upcoming deck. And while there are no blue Mirrodin Besieged-cards here I’m talking about, there still was a small blue man that managed to find his way into this article and quite possibly into yet another deck (that was supposed to remain non-blue, no less). 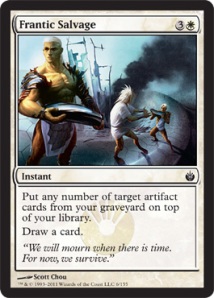 First up is the artifact-version of Footbottom Feast / Bone Harvest, Frantic Salvage. It’s too bad they had to up the cost by one, since I’m a big fan of mirrored cards (sort of like planeshifted cards where not only the color shifted, but the mechanic as well). That’s probably because of shenanigans those artifacts can induce, like those cogs. I imagine some sort of new Egg-deck would like another three-mana Second Sunrise.

Ah, Galvanoth. You offer me such great possibilities. Like casting Cruel Ultimatum and such – for free. This card has all the makings of another great Johnny card and I’m sure I will abuse it as such one time or another. Since I continually fall for the Dark (read: Blue) Side, it would be a challenge to resist that temptation for once.

Wizards, are you really printing a Mirari for artifacts? The answer is yes, and Mirrorworks is your  new, all chromed up Mirari. I love the flavor slash nostalgia,  I love copying things like Mirari did, and I love artifacts. I’m at a loss for a fitting comparison.

There we have it: the Trifecta. You see, I believe it was Steve Sadin who coined the term Trifecta for winning simultaneously by decking, damage and poison counters. There have been stories of such things happening in drafts, but I don’t know if this is true or not. What I do know is that there will be people who are gonna build decks using Decimator Web to accomplish the Trifecta. I’m looking forward of seeing actual Trifecta evidence, and I think Decimator Web will have some part in it.

Okay, fasten your seatbelts, because we are going on a wild ride full of flavor and awesomeness. Plaguemaw Beast is the most important reason I am writing this. As you know from my previous article, the possibility of a (Mono) Green Proliferate-deck has nestled itself in my mind. I can’t get rid of it, something that got even harder when Mark Rosewater showed the world this… beauty?

As you may know, the deck is looking to contain a splash of black, mainly for Glissa the Traitor. Glissa works wonders with sacrificing. She probably loves proliferate as well, since each time I kill a creature by using Throne of Geth, I’ll get the investment back. Also, Executioner’s Capsule has a advantegeous interaction with Glissa, sniping down non-black creatures for 1BB apiece.

Notice how the Throne-fuel is not only artifact, but creature as well? That’s where the big ol’ Plaguemaw stomps in. (I hope you get the pun in the title by now.) I needed more ways to cheaply regenerate, and a creature is probably the best way to go, especially when those creatures are Myr Servitors and Myr Retrievers. Retrievers and Glissa ensure you pretty much never run out of Servitors, which means you pretty much never run out of ways to proliferate. Add Dross Scorpion and your Thrones of Geth can go on for as long as you have mana – and if you’re doing things right, Everflowing Chalice keeps on collecting counters, netting you more mana if you tap your lands first to chain Retrievers into another.

But that’s probably not the way to go, as I’ll try to preserve my mana for creatures like Spike Weaver, Cytoplast Root-Kin and similar dudes. I’ve also been looking into some modular-creatures and creatures like Triskelion to use and abuse. Mycoloth is a card I’m still a bit on the fence about, but I fear Plaguemaw Beast has made a more convincing claim on the spot Mycoloth previously held.

Right now the ideas I have are a bit unfocused. For instance, I envisioned this deck to be another take on Everlasting Torment, but quickly realised proliferating is more fun when you grow your guys and shrink theirs, not just shrink theirs. Besides, Spike Weaver and Spike Feeder are overpriced vanillas with a Torment on the battlefield. This is why my initial enthusiasm about Black Sun’s Zenith has also dwindled since.

If I were to pin down where this ship is going, I’d say it would be a deck that uses  sacrificial and recurring effects to keep getting advantages and adding counters to permanents. I noticed how an innocuous little blue fellow, an old friend, could assist greatly in this cause. You know him by the name of Trinket Mage. 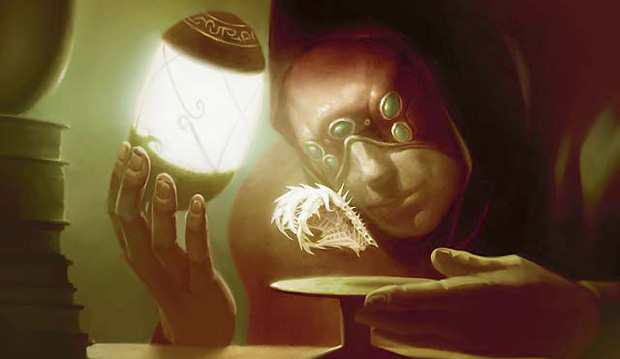 I noticed how I was steering towards a dependance on Myr Servitors, and how much power I would gain from being able to cheaply tutor for him. Sure, Primal Command was (and still is) on my extensive shortlist, but paying five mana for seven life and a small little Myr feels a bit liking overpaying. Paying 3U for a 2/2 and a 1/1 is more like it. Besides being able to tutor for those cards, he also finds E-Caps, artifact lands, and – and I hope I’m not being too cute here – an Expedition Map for me to find either Academy Ruins for artifact recursion, or Urborg for helping with recurring E-Caps. Did I mention Trinket Mage also fetches Everflowing Chalices?

As you see, this new set has set the makings of a new deck in motion. Writing this has actually help me hammer down the essentials of the deck (again by forcing me to explicate the way I see this deck functioning and winning). That leaves me with the task of sorting through al the chaff I dug out of various search queries. That is, however, material for a later time. I have to let the deck sink in a bit and see what cards I can naturally cross off of my list.

Again, I wish you all the best of times at your prereleases this weekend, as I’m sure to be doing the exact same thing. Talk to you later!